This review will focus on the 3 samples which were on offer during the Bruichladdich Micro Provenance 4 livestream and tasting session at the offices of Remy Cointreau Asia on the morning of the 14th of October.

The samples are as follows:

Special thanks to Mr Richard “Cannonball” Gillam for the invitation and it was a wonderful experience!

So, let’s jump right in! 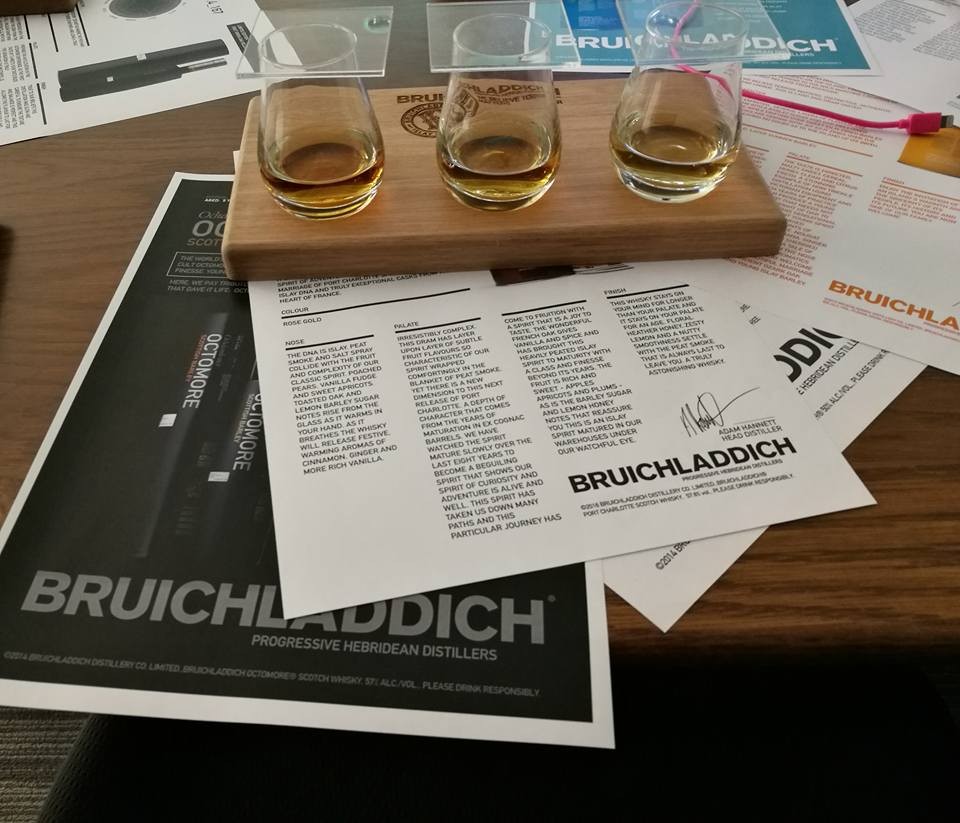 Nose: Initial entry presents a fair bit of oak coupled with a certain citrusy sweetness and the typical winey note that one would expect from an ex-Syrah matured whisky. With time, orange boiled sweets and orange oil make an appearance and this is complemented by barley sugar and a slight hint of acetone.

Palate: Initial entry is sweet and slightly oaky, with the citrusy sweetness taking on the form of orange zest and the aforementioned orange boiled sweets. The winey note on the nose appears on the palate, but prefers to linger in the background.

Barley sugar and chewy malt emerge after some time and there is a fair bit of heat from the alcohol strength of this dram. Cinnamon and acetone towards the very end.

Finish: Medium on the finish and rather oily, with the citrus notes fading away slowly and being replaced by the oak and some cinnamon.

Balance: A fairly well balanced dram which exhibits a good level of complexity and a multitude of aspects. The alcohol strength does pose an issue initially, but the addition of some water does help to quell the heat and allows for more of the mellow complexities to shine through.

Nose: Initial entry presents the typical mild salinity of Bruichladdich coupled with some sweet sherry hints and oak. Considering that this is a finish, the amount of sherry in this dram is rather pronounced and is complemented by the typical wood spices as well as a hit of alcohol. With time, lemon peel, apricots and plum emerge along with some black pepper.

Palate: Initial entry presents more of the sherried sweetness from the nose, but it is not as sweet as initially expected. The bourbon-esque layer beneath the finish is apparent, but adds to the complexity of this dram. Cinnamon, nutmeg and cloves emerge and intermingle with chewy malt, barley sugar and some black pepper.

With time, the sherried sweetness becomes more pronounced and hints of apricots, plum and some raspberry jam emerge, adding to the sweetness. The alcohol strength keeps things in check rather well though.

Finish: Long, lingering and generally sweet on the finish, with the sherry and the red fruits dominant and quickly followed by the wood spices and oak.

Balance: A very well-balanced and complex dram which exhibited a multitude of intricacies while allowing for the individual aspects to shine. For a sherry finish, this was quite impressive!

Nose: Clean, sweet and bourbon-esque on initial entry, with the sweetness of the ex-bourbon casks coming through along with the cinnamon, black pepper, vanilla and oak that one would typically expect from such a maturation. There is a vibrancy to the spirit which gives it a refreshing feel.

Palate: The clean and sweet bourbon-esque notes transfer from the nose to the palate and the vibrancy of the spirit is very much on display here, with freshly ground cinnamon and black pepper intermingling beautifully with vanilla pods and subtle oak.

The chewy malt and barley sugar notes emerge fairly quickly and add on to the mix, which makes this an even more mouth-watering prospect. The spirit coats the palate well and engages all areas, allowing for a good level of complexity to cascase through. Just a tiny hint of that typical Bruichladdich salinity at the very end.

Finish: Long, lingering and sweet, with the bourbon-esque notes and the various aspects with accompany it transferring on to the finish as well. A very more-ish and impressive dram!

Balance: Superbly poised and a very good representation of that pure Bruichladdich character which is best showcased through maturation in ex-bourbon casks. The vibrancy of this dram is impressive to say the least and it ran the sherry finish expression very close in terms of which was the best of the night in my opinion. If this had been bottled for retail sale, I would definitely have purchased it!

Until the next review, have a wonderful week ahead.

My name is Brendan and I love nosing and tasting whiskies as much as I enjoy writing about them. I am a whisky lover who seeks to travel to distant distilleries in order to further educate myself about the wonderful world of the Water of Life. As I learn, I intend to share my experiences and thoughts with people while also providing reviews on whiskies old and new. I welcome comments and am always happy to engage in spirited dialogue (pun intended of course!).
Loading Comments...